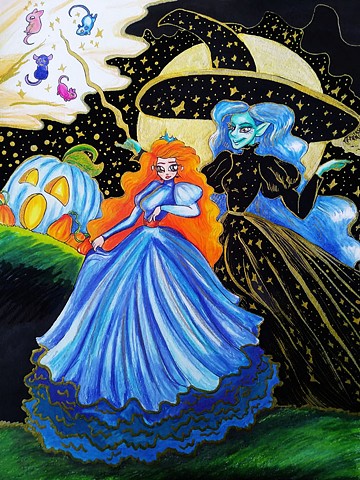 I wasn’t cut out for this. But the girl was crying, genuine streaming tears that cleaved tiny rivers through the soot on her pretty face.

No one else was around to help, except for the little mice scampering around her feet. I wasn’t the sort who offered help, but what was the harm in asking her what was wrong?

She wanted to go to some party, a ball. Just a nice night, a shining memory that was safe from the soot of her life, the greedy fingers of her stepsisters. I could give her that. Maybe I could give her more than that.

The pumpkin carriage looked a little spookier than it should, like a jack-o-lantern, but she didn’t offer any complaints. She just thanked me, again and again, her eyes shining like stars.

Most people called me a wicked witch. I’d never been someone’s fairy godmother before. But I suppose it’s never too late to start.