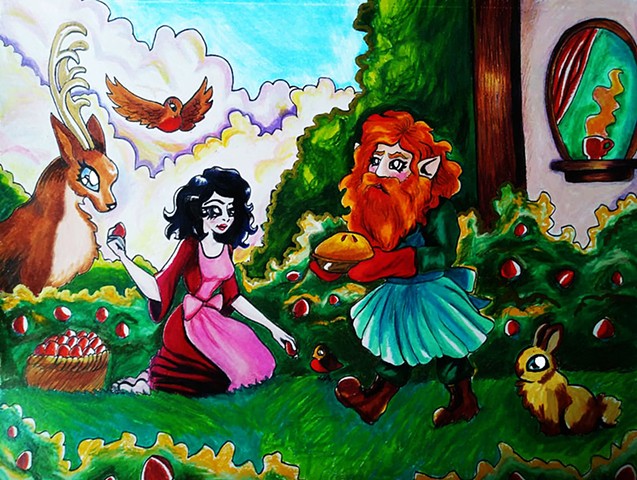 The prince was having an unusual day. Not because the girl he’d taken for dead sat up with a choking sound, hacking up some piece of fruit, and not because she’d apparently been living with seven small miners, but because she didn’t seem to want to come and live with him.

She was very polite about it, which made it all even stranger. “Thank you, really, I cannot thank you enough,” she kept saying. “But I’m happy where I am!”

“But...I’m a prince,” said the prince, pointing dumbly to where his crown would be, if he were wearing it.

“And I’m a queen, technically,” smiled the girl, smoothing her skirts. “Now that my stepmother is dead. But I’ll have to appoint someone else to run my kingdom, at least for the time being. I’m still so young, and I don’t have any training.”

“Alright, but –” the prince didn’t have the chance to finish his sentence, because one of the little bearded miner men stepped in.

“You heard her, mate, she’s not interested. Anyway, a bit young for you, isn’t she? How old are you, anyway?”

“Yeah, by accident,” grunted another, his short, brawny arms folded. “Wasn’t even him, technically, it was the two guards who were carrying the coffin.”

The first dwarf narrowed his eyes. “What were you planning on doing with a dead body, anyway? You some sort of pervert or something?”

Suddenly feeling rather unwelcome, the prince decided to cut his losses.

The girl – or princess, or queen, rather – seemed to agree. She smiled apologetically. “I really should stay. They’ve been so kind to me. And I promised them I’d show them how to make strawberry pies.”

“And gooseberry,” chimed in one of the dwarfs.

“And apple,” said another.

The prince watched her go, surrounded by her guard of little miners and trailed by woodland animals. Birds that seemed to twitter exclusively in her presence.

He gave a wistful sigh. “Some men have all the luck.”